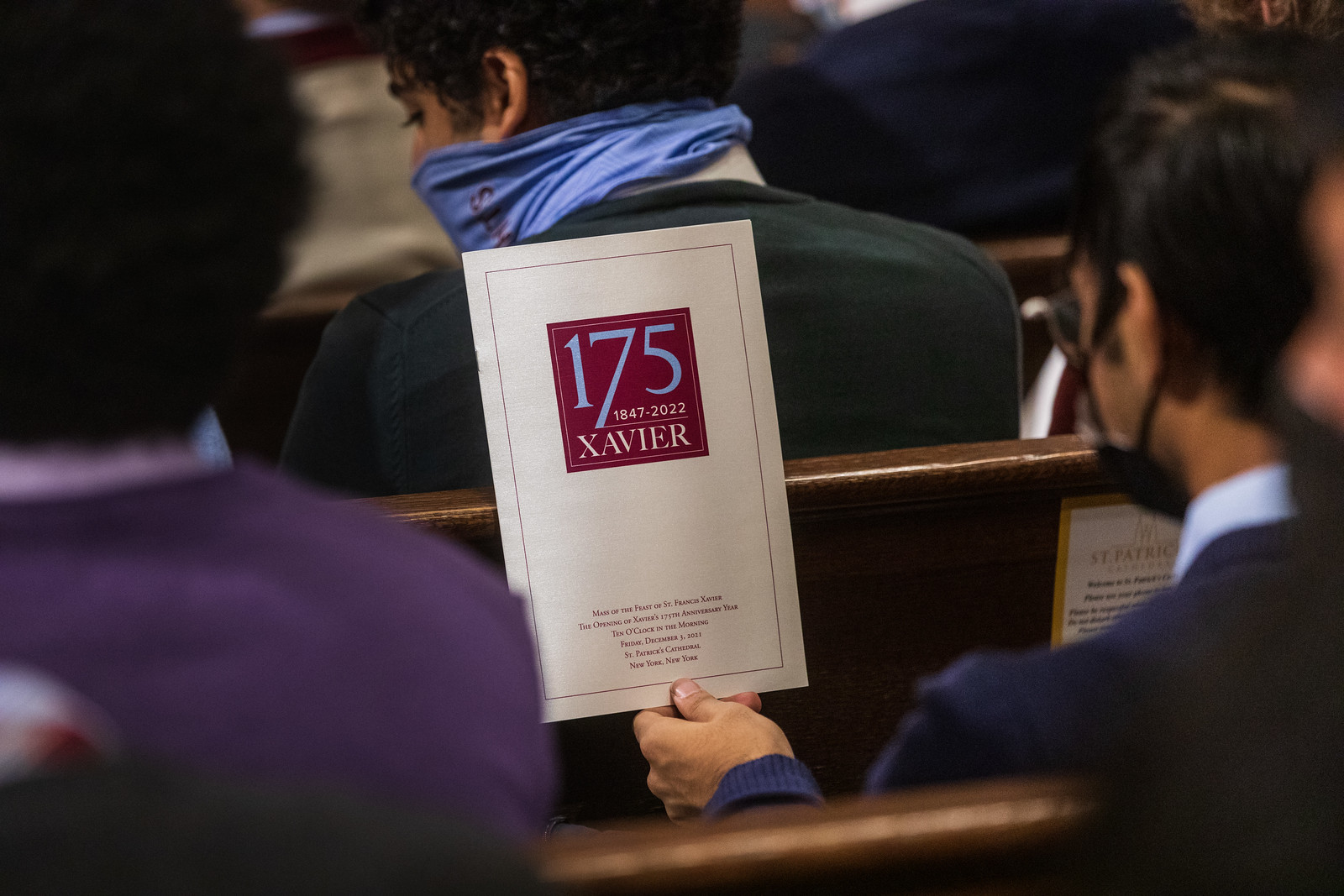 Above: Click to view photos from Xavier's 175th Anniversary Opening Mass and Luncheon

Xavier celebrated the official opening of its 175th anniversary and the feast of our patron, St. Francis Xavier, on Friday, December 3, with a special Mass at St. Patrick’s Cathedral.

Students, faculty, staff, parents, trustees, and other guests gathered at the Cathedral for what was the first of many events marking Xavier’s anniversary year.

His Eminence, Timothy Cardinal Dolan served as principal celebrant alongside many members of the Society of Jesus.

Xavier’s headmaster, Kim Smith, delivered the opening remarks at the Mass. Smith invited the community to soak up the sacred space, to engage in the feast day Mass, and to pay attention to the love and grandeur around them.

“For 175 years, Xavier High School’s Jesuits, administrators, teachers, coaches, and counselors have been committed to helping and guiding students,” Smith reflected. “And for 175 years, students have gathered under the banner of Xavier to become sturdy witnesses and lively testaments to God’s grandeur and love.”

Over 100 members of Xavier’s own faculty and staff processed into the Mass after the posting of the colors.

Cardinal Dolan went on to reflect on the mission being at the center of Xavier’s identity for 175 years, and on the holistic education that has enabled so many students to go forth to transform the world for God's greater glory.

“No matter where it is at, mission is very important in the life, ministry, and identity of Xavier High School,” Dolan said. “For 175 years, Xavier has educated the mind; the intellectual; the academic. They have also educated the heart; to love; and to love responsibly. They have also educated the body with excellent physical education. Most of all, they have educated the soul … Mind, heart, body, and soul—that’s integrated; that’s holistic; that’s the full person, and they’ll [students] say when they left Xavier with that formation, they were on fire in mission to the world.”

President Jack Raslowsky P'16 spoke at the conclusion of the Mass, reflecting on the 175-year-long story of Xavier, and addressing the entire Xavier community—those joining in prayer in person and watching across the globe.

“I come before you filled with gratitude. Gratitude to God for the work of Xavier High School; for the men and women who have done and continue to do that work each day; for the families who entrust their sons to us through the years; for the Sons of Xavier who, for generations, have given us reason to do the work; for the alumni and benefactors who support the work now and through the years,” Raslowsky reflected.

Xavier also opened the Mass to current and former parents and alumni—allowing them to take part in the celebration that they, too, have helped make possible.

“It was lovely attending Xavier’s opening Mass for its 175th anniversary,” reflected Charlie Larkin '98. “By pure accident I happened to be in the United States visiting family after two years of being away from them due to COVID-19. It was a lovely homecoming, and I am glad to see the continued success of the school community.”

"Sitting in St. Patrick's Cathedral, surrounded by the Xavier community, was a true honor," said Antoinette Quatela P'22. "The church was full of people who made and continue to make Xavier great. Participating in this anniversary Mass and watching with pride as my son, Giuseppe Quatela '22, read from on the altar made this an unforgettable experience. It is a privilege that he is able to represent his school as the Cadet Colonel and to be a part of the 175-year history and legacy of Xavier. I know he will look back on this day, and all his days at Xavier, with gratitude and delight."

A luncheon followed the Mass at the New York Athletic Club.

There, faculty, staff, parents, trustees, and alumni gathered for an afternoon of celebration—celebration of the community we hope to make even stronger over the next 175 years.

The feast day celebration was only the first in a series of special events marking Xavier’s 175th anniversary.

The community kicked off its 175th Anniversary Conversation and Lecture Series with a visit from Police Commissioner Dermot Shea '86 the following Monday, December 13.

Students gathered in Keenan Commons to watch Raslowsky and Shea discuss leadership, service, and current events in the city and country.

“What Xavier does is put you into a position to succeed,” Shea told students. “This is going to be your city one day. Whatever path you take—make the most of it.”

This installment was for students. Throughout Xavier’s dodransbicentennial celebration, some lectures and conversations will be held in the evening and geared toward alumni, parents, and friends.

We will share information about additional 175th anniversary events soon and feature them on our anniversary microsite. We look forward to celebrating Xavier alongside you during the coming year.