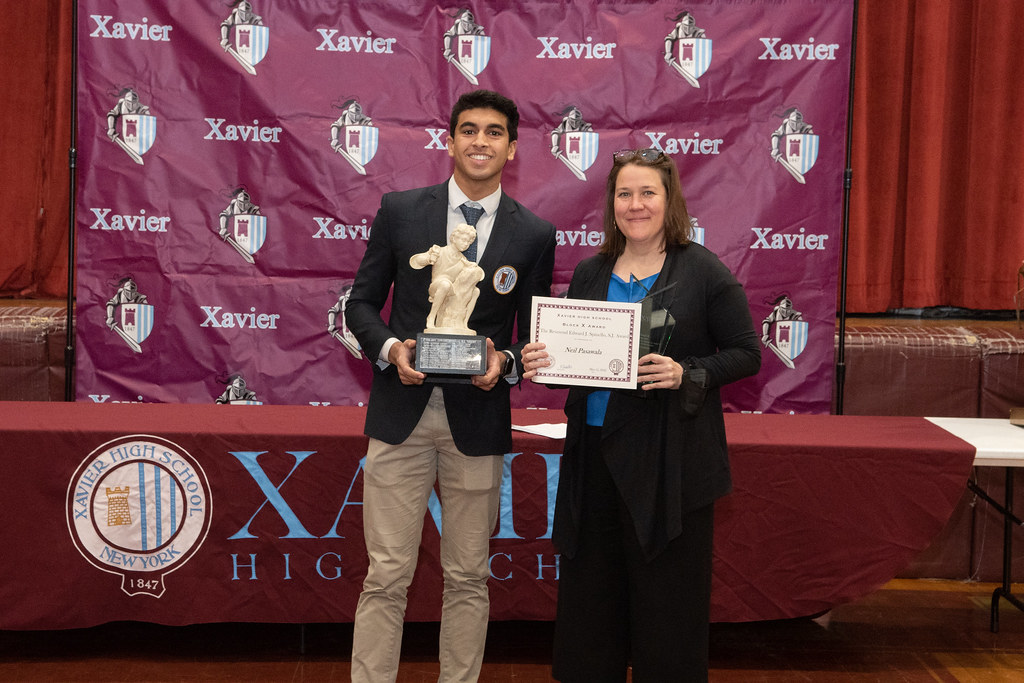 Faculty, staff, alumni, students, and parents gathered on Thursday, May 12, to honor students for their outstanding achievements at Xavier. Since 1941, the storied awards have honored Xavier student contributions to campus life.

This year’s awards ceremony was the community's first full in-person gathering in the Main Gym since March 2020. The community was thrilled to be together to honor and celebrate those who have monumentally contributed to life on campus.

Headmaster Kim Smith opened the ceremony and commended the honorees for their hard work, presence, and commitment.

From the Yearbook Club to the bowling team, to overall honors, the Block X Awards commend Sons of Xavier for their personal growth, team leadership, service to others, and academic excellence.

“I am thankful we were able to gather fully as a community in person to recognize the outstanding achievements of our teams and student-athletes,” said Director of Athletics Andrew Gheraldi. “Neil Pasawala ’22, this year’s Spinello winner and a varsity volleyball student-athlete, and Ciaran Murray ’22, our Moynahan winner, delivered powerful messages about hard work and resilience.”

The Rev. Edward J. Spinello, S.J. Award for Co-Curricular Activities is named after a Jesuit who, throughout his years at Xavier, encouraged students to participate in as many activities as they could.

“Receiving the Spinello Block X Award is an indescribable feeling,” said Pasawala. “I am immensely overjoyed to have been recognized for my extracurricular efforts by both teachers and students. It is a testament to my belief that, over these last four years, I have made the most of my time at Xavier, both in and out of the classroom.”

The Bernard M. Moynahan Award is given to a student whose dedication to both athletics and scholastics is outstanding.

Awards were not only designated for academics and athletics, however—some awards were designated for students who exemplify specific values, such as the Gerard J. Werckle Award, which is given to a student whose life emulates faith, dedication, and service. This year’s winner of the Werckle Award was James McGillick ’22.

“Ignatius says, ‘Love is shown more in deeds than in words,’ and for me, service has been all about putting the values that Xavier ingrained into me—being a man for others, being loving, caring for the vulnerable, doing everything for the greater glory of God—into action,” said McGillick. “Throughout my time at Xavier, I made an effort to get involved in service as much as I could because I quickly realized that service enriched my faith and spirituality, my awareness of the injustices in the world around me, and my capacity to love. I deeply admire the values of faith, dedication, and service held by Mr. Werckle and am humbled to have received an award for my service work in his memory.”

The full list of this year's Block X award winners is below. Congratulations to all of those who were recognized!